If you have read the Musketeer fiction of Dumas, you are very well acquainted with the character of d’Artagnan, his bravery and his struggles. Dumas based his The Three Musketeers, Twenty Years After and The Vicomte de Bragelonne on a novel by Gatien de Courtilz de Sandras called Les mémoires de M. d’Artagnan. A sort of semi-fictionalised memoir…. but Monsieur d’Artagnan’s life needs no fiction to be interesting.

Charles de Batz de Castelmore, was the son of Bertrand de Batz, who was the son of a newly ennobled merchant and held the title Seigneur de Castelmore et de la Plagne. His mother, Francoise de Montesquiou d’Artagnan, came from a very old nobile family from Gascony. Charles was born between 1611 and 1615 at the chateau de Castelmore, county of Fezensac near Lupiac.

His parents married in 1608 and Charles was not their only child. He had three brothers and three sisters, Charles being the youngest of them all. After a childhood in Gascony, of which not much is known, it seems Charles developed the desire to serve as soldier… or rather Musketeer. He left his home and headed for Paris to join his brothers. Two of them were soldiers, the other an abbot.

Since the family name of his mother came with a bit more prestige, and was also known at court, Charles did not go to Paris as a de Batz de Castelmore, he went as a d’Artagnan. Luckily for Charles, he didn’t just have brothers in Paris, but also a famous uncle. Henri de Montesquiou, Comte d’Artagnan. And as it happened, this uncle was buddies with a certain Jean-Armand du Peyrer, Comte de Troisville or Tresville. The latter was an officer of the Régiment des Gardes françaises, who then joined the Mousquetaires de la garde.

Said Musketeers were a relatively new invention. They were created in 1622 to act as bodyguards for Louis XIII and originally consisted of 100 men, members of nobility who previously served in the army. This was essential to become a member of this mounted regiment, armed with swords and muskets.

Since nobody could become a Musketeer without having first served in a regiment of other armed forces, d’Artagnan joined the Régiment des Gardes françaises under Monsieur des Essarts. This regiment saw a lot of action in the 1640’s at the sieges of Arras, Aire-sur-la-Lys, la Bassée and Bapaume, Collioure and Perpignan. It is unclear how much Charles engaged in those, but likely he took part in some.

Monsieur d’Artagnan managed to get himself a very illustrious protector during this time. It was Cardinal Mazarin and thanks to him, d’Artagnan became a Musketeer in 1644. But the fun only lasted two years, for the Muskeeters were disbanded in 1646… by Mazarin.

It was a turbulent time for France. Louis XIII had died in 1643 and Louis XIV was still a small child, whose mother acted Regent for him. Mazarin was not a too popular man and soon the tension grew and grew to turn into a sort of civil war, the Fronde. Monsieur d’Artagnan entered the personal service of Mazarin after the Musketeers were disbanded.

During this time, d’Artagnan acted as carrier of secret messages between the Cardinal and his allies, and carried secret missions out. All of it brought him the Cardinal’s respect and the trust of the young Louis XIV. As the Cardinal had to go into exile, Monsieur d’Artagnan followed him. This did not go unrewarded either, for Monsieur d’Artagnan was made lieutenant in the Régiment des Gardes françaises in 1652. One year later, Mazarin granted him the office Capitaine concierge de la volière du Roi. Another year later, in 1654, d’Artagnan nearly got killed during the Battle of Stenay. He also participated in the sieges at Lancrecies and Saint-Ghislaine.

In 1655, Monsieur d’Artagnan sold his previous charges and, with a borrowed 4,000 livres, got himself the position of captain.

Then, in 1657, Mazarin decided to bring the Musketeers back to life. This time, 150 men strong. Mazarin liked to keep things in the family, thus the office of captain-lieutenant went to his nephew Philippe-Jules Mancini… but the Duc de Nevers wasn’t really too interested in it all. He was more of a lover than a fighter. Monsieur d’Artagnan was given the office below him, that of sub-lieutenant, in 1658 and took over most of the responsibilities the Duc de Nevers had. Acting captain-lieutenant for him. 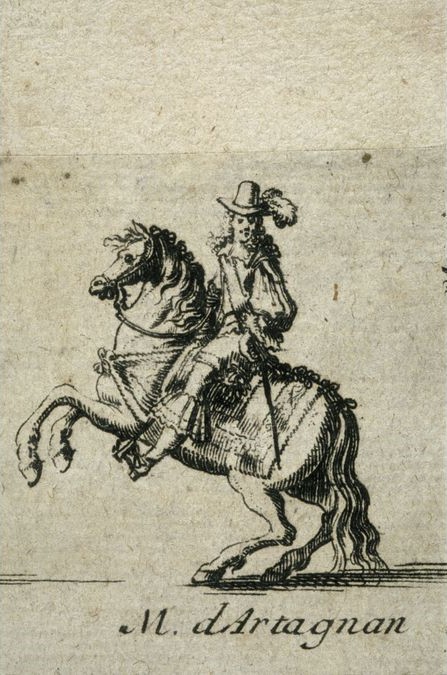 Charles de Batz de Castelmore didn’t just have military service in mind, he also frequented various Parisian salons of the literary kind for a bit of entertainment. During one of those visits, he met a rich widow and married the lady shortly after. Anne Charlotte de Chanlecy, dame de Sainte-Croix, became his wife on April 3 in 1659 and their first child was born the following year. It was a son and named Louis in honour of the King. Another son followed in 1661 and was also named Louis.

As Mazarin died in 1661, the Musketeers passed back to Louis XIV and saw a major restructuring in 1664. The two companies were reorganised: one company took the name mousquetaires gris from the colour of their matched grey horses, while the second was called mousquetaires noirs and mounted on black horses. At roughly the same time, the size of the Musketeer companies was doubled.

Louis XIV held d’Artagnan in high esteem and entrusted him with a delicate mission. The King was fed up with Nicolas Fouquet, especially after Fouquet hosted this little party at Vaux-le-Vicomte, and wanted to get rid of him. Actually, the task was more of a job for the captain of the Garde du corps du roi, but said captain was a Fouquet friend. Thus d’Artagnan got the job. He was to arrest Nicolas Fouquet and act as his jailer afterwards. He accompanied Fouquet everywhere over the course of the next year for his trial and continued the to look after Fouquet for another two years afterwards. Monsieur d’Artagnan got quite a bit praise for how he dealt with the situation… but it might have caused the end of his marriage.

D’Artagnan was hardly home and his wife got fed up with it. They officially separated in 1665.

Two years after the separation, Charles was appointed Capitaine des petits chiens du Roi courant le chevreuil, a position which granted him accommodation at Versailles. He resigned the following year, 1667, for a even better job. That of captain-lieutenant of the Musketeers. As such, he was entrusted with another delicate mission. The arrest of the Duc de Lauzun in 1671, who had a rather scandalous thing going on with the Duchesse de Montpensier.

Another promotion made Charles governor of Lille. The town, and its 50,000 inhabitants, was in French hands since 1667. The Marshal d’Humieres acted as governor there, but fell out of favour and the job was given to d’Artagnan. Monsieur d’Artagnan acted as governor from April to December 1672… and was rather unpopular. He didn’t really enjoy the task either and longed to return to the battlefield.

Louis XIV gave him the change to return to the fields of battle with the Franco-Dutch war. Monsieur d’Artagnan did not survive it. He was killed on June 25 in 1673 at the Siege of Maastricht, either by a musket bullet ripping his throat open or hitting his kidney.

The Musketeers mourned their brave captain and also Louis XIV was filled with grief. As the Mercure Galant reports, the King wrote a letter to the Queen the very same day: “Madame, I have lost d’Artagnan, in whom I had the utmost confidence and who merited it in all occasions.“