Henri IV did not have a easy time. As King of Navarre, he was constantly warring. As heir to the French throne, many were against him and wanted to prevent him from taking the throne. As then King of France, things were not easier for him. Then he got assassinated and mysteriously lost his head almost 200 years later. How did that happen?

Nobody really knows. Le Bon Roi Henri did a lot for France during his time as King and among other things, he ended the war between Catholics and Huguenots and gave the latter the right do follow their religious beliefs. Some still remembered him fondly for it during the infamous Reign of Terror of the French Revolution, as statues of Kings and Queens were pulled down all over France and the signs of anything royal destroyed, as nobel and royal heads rolled…

…but the Reign of Terror made no exceptions. In 1793, it moved to royal tombs of the Basilique de Saint-Denis, the traditional burial place of the Kings of France, who rested there with their Queens and families. The crypts were opened, the tombs destroyed, the bodies removed from their lead coffins, which were meant to be recycled and turned into ammunition. The bodies were stripped of anything valuable, like brooches, rings, shoe buckles, and then tossed into a mass grave next to the old Basilique. Then they were covered with quicklime, meant to obliterate whatever was left of them.

Henri IV received a special treatment, before he was tossed into said mass grave. They took his body out and put it on display for two days… and somehow, it seems, his head went missing then.

Nobody knows when that happened and how it happened. In 1817, during the Bourbon Restoration, Louis XVIII ordered his ancestors should be returned to their former burial place. The mass grave was opened, but it was impossible to identify who was who, since there was not much left. All bones that were gathered from the mass grave, were returned to the crypt and buried together in a ossuary of black marble.

That is when the talk of Henri IV having lost his head began. According to the notes made back then, three of the bodies were missing their ‘upper’ halves and some took that to mean that three of them were sans head. This in turn, started talk of how Henri IV’s remains had been mistreated during his two days on display. There was talk of it being cut into pieces with swords and of some doctor, who waved a severed head by the mass grave. Yet, there is nothing dating to the time of destruction of the tombs, mentioning that the remains of le bon roi Henri had been beheaded.

A good hundert years later, in 1919, objects of the workshop of Emma Nallet-Poussin, a sculptor and painter, were put for auction. Among those objects, were three mummified heads.

Joseph-Emile Bourdais, who sometimes acted as a second-hand dealer, bought them for 3 Francs. Monsieur Bourdais came across an article in the Gazette des arts some years later, which made him believe that one of those heads is the head of Henri IV. He was quite thrilled by it and spent the rest of his life, attempting to prove to the world that he was in possession of la tête d’Henri IV. Monsieur Bourdais spent a whole lot of money on it, had pictures taken, x-rays and casts done, and published two brochures to prove his grand discovery. In vain.

The authenticity of the head was doubted by the learned folks. Monsieur Bourdais put the head on display in his home, then in a small museum, then wanted it to be displayed at the Louvre, the former Parisian residence of the Kings of France, but the Louvre also questioned the authenticity. There was hardly anyone who believed the poor Monsieur Bourdais. Even-though he also had an explanation for how the head went missing in the first place. He launched the theory, of a Swiss Guard having acquired the head during the Reign of Terror and this Swiss Guard then sold the skull to the Comte d’Erbach, who was a great collector and kept the head at his German castle, until it found its way back to France via Napoleon’s youngest brother Jérôme Bonaparte, King of Westphalia.

Monsieur Bourdais believed to the very end that he found the missing tête d’Henri IV. He was so sure, that he ordered a image of him and the mummified head was to be put on his grave as he died in 1946. To his death, it was still his wish for the head to be placed in a museum, but all refused. Thus the head ended up in possession of his sister, Madame Gaillard. She kept it until 1955.

A certain Jacques Bellanger heard of the whole thing and acquired the head from Madame Gaillard for 5,500 Francs, around 115€ today. Monsieur Bellanger, quite the history buff, wasn’t sure what to do with the head… thus he put it in a cabinet on his attic and there, rested the supposed head of Henri IV until 2010. 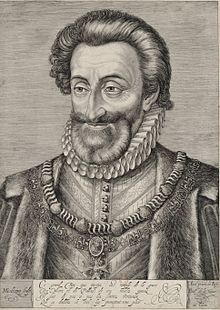 A year earlier, in 2009, the journalists Stephane Gabet and Pierre Belet, having heard of the story, started to work on a documentary called Le mystère de la tête d’Henri IV. To figure out what happened to the body of Henri IV and whether his head was lost or not, they contacted the historian Jean-Pierre Babelon. Monsieur Babelon, who was in charge of the domaine national de Versailles in the past, told them that some time ago, he was contacted by a collector, who claimed to own the missing head of one of France’s greatest Kings. The journalists managed to track that collector, Monsieur Bellanger, down and persuaded him to entrust the mysterious mummified head to someone trust-able, so it can be analysed in order to confirm if it really is that of Henri de Navarre, the first Bourbon King of France… and who could possibly be more trust-able to take good care of it, than a family member of the great King?

The mummified head was entrusted to Louis de Bourbon, Duc d’Anjou, aka Louis XX, in 2010 and placed in a vault of a Parisian bank. (I do not know how familiar you all are with the whole légitimiste vs orléaniste issue. Basically if France would return to be a Kingdom, leaving the Napoleon issue aside for the moment, there are two Bourbon Messieurs claiming the throne. One is Louis de Bourbon aka Louis XX, the other is Jean d’Orléans aka Jean IV. Their lineage meets at Louis XIII, the first descendants from Louis XIV via le Grand Dauphin via Philip V of Spain, the latter descendants from Philippe d’Orléans. It’s all rather complicated and quite a sensitive topic for some. I meant to do a post on it, but did not do it yet, because I’m afraid I’m not entirely neutral on the matter… that being said, vive le roi Jean IV.)

Originally, it was planned to bury the head, if it was indeed that of Henri IV, at Saint-Denis once it had been analysed… but until today it is not quite clear who the head belongs to. One side argues it is indeed the lost head of le roi Henri, the other side challenges it.

During the first examination, done in 2010, carbon dating was done, which put the head somewhere between 1450 and 1650. Henri IV was born in 1553 and died in 1610. The examination concluded that the head was separated from the body long after the death, which makes sense considering the head was separated from the body in 1793. Anthropological studies concluded, the age, the sex and the ethnicity match as well. Henri IV is shown with a grain de beauté, a birthmark, on some paintings and also the mummified head has a similar one. Whoever the head belonged to, might have worn a earring at times and there is one engraving showing Henri IV wearing a pearl earring… but that was done in 1640, so long after his demise. The mummified head shows a bone lesion at the mouth, like the one Henri IV had suffered in an assassination attempt in 1594… but documents of the time, state it was a wound at the upper lip on the right side and the mummified head shows a bone lesion on the left side. Hair colour, remains of beard and moustache, fit Henri IV, but back in the days it was a very common style.

It was discovered that the owner of the head, only had 4 teeth left at the time of his demise and that the neck shows signs of a post mortem. The mummified head was compared with the death mask of Henri IV, which is kept at the Bibliothèque Sainte-Geneviève, and similarities were discovered. It was also discovered that the mummified head was in contact with plaster at some point, like it happens when creating a death mask, but the traces of plaster found, date to the 20th century and not the 17th century.

The head shows sign of embalming and has been in contact with bandages. According to reports from 1793, Henri IV’s remains were bandaged and those bandages then removed.

So, there are some things that hint it might be la tête d’Henri IV and some things that contradict it. Thus the first examination, was quickly challenged and a dispute arose over how Henri IV was embalmed among other things. There was no DNA testing done back then.

A sample from the throat of the mummified head was taken in 2012 to extract DNA. The extracted DNA was then compared to a sample DNA of Louis XVI, Henri’s great-great-great-great-great grandson. The Louis XVI sample comes from a handkerchief, which was dipped in the blood dripping from the guillotine that beheaded Louis XVI in 1793. That handkerchief was then kept in a gourd by an Italian noble family. According to that study, the DNA samples matched. (Which would also mean that Louis XIV could not possible have been fathered by Cardinal Mazarin.) This result was again challenged quickly…

Starting already with the fact, that scientist can not quite agree if the blood on the handkerchief is actually that of Louis XVI or not. (Google ‘blood of Louis XVI’ and you will have a ton of entries claiming either that it is or is not authentic.) Then other DNA tests with relatives of Henri IV were done and did not match. DNA tests comparing the handkerchief DNA with DNA of Bourbon relatives, did not match either. These results were, of course, challenged too… and so it goes on and on and on.

The matter is not clear until today. The mysterious mummified head kept in the vault of a Parisian bank might indeed be that of le bon roi Henri... or not. Maybe we will find out one day, if Henri IV really lost his head during the French Revolution or if the whole thing is fiction and whoever carried the mummified head once on his shoulders was just some poor lad.

A Party at Chantilly

Funny And Not So Funny Things That Happened At The Court Of Louis XIV, Part Two