Versailles….. home of Kings. Where everything is so very political, where nothing was placed without purpose, where every corner yells power and beauty. I have read about this place, the people who lived there, the events that happened there. I saw this place and was overwhelmed. If you spend years with reading and researching a certain topic, seeing the actual places, where the things you read so much about happened, can be rather overwhelming. The thought of placing your feet on the very ground so many people you adore and love walked on. It inflicts a feeling of closeness, being home even.

The first time I heard of a series being planned with the very topic of Versailles was at the end of last year. I was terrified. I immediately thought of a conversation I had with a friend at the height of the The Tudors mania some years ago, where I said they should do a show called the Bourbons and it would be the best thing on the planet. At the time the first mentions of Versailles reached me, I had a quite different opinion of it and the reason is simple…. there are only a few things the in world, including family and friends, which I love more than the time of Louis XIV and by now I have grown oddly protective of it. It started as an odd fascination with Louis himself and quickly spread to include his whole court and every piece of information I was able to find about it.

I remember the day it caught my interest… I was fourteen, maybe fifteen, and sitting in history class… it was very boring and I started to flick through the pages of my history book until I came to the page with the print of Bernini’s Louis XIV bust and was immediately taken by it. The next thing I did was to order quite a few books.

Now, we have quite a few years later and in the meanwhile Louis was pushed off the throne of being my favourite person in history by who I like to call the most adorable person in history, his brother Philippe and along with him his long time favourite the Chevalier de Lorraine.

Louis was not thrilled of being pushed off his throne by Les Philippes, but I was as I heard Alexander Vlahos was to play Monsieur. What a cutie. I have seen a bit of him as Mordred in Merlin and was quite sure that he couldn’t possibly do a bad job as Monsieur. I had never heard of Evan Williams before and I must admit I was not too impressed with the promo pictures I saw of him as the Chevalier. Evan is rather attractive, but I found his features to be a little too… well, not how I picture someone described as having a face of an angel. I would have preferred someone more baby-faced, but that is just in comparison to how I picture the Chevalier in my head and doesn’t make the great acting Evan does less great, and it is very great. George Blagden, like many others I had seen him in Vikings, and I was quite confident he would do a good job. The promo pictures made me even more confident, for he had that air about him on them that was yelling Louis. I have always been rather critical with actors playing Louis XIV and over the time developed something like a Louis XIV scale. George got a 8 on the Louis XIV scale after I saw those pictures, not just the promo ones, also all the others posted by the unofficial and very great Versailles account on Twitter. He got a 9 on the scale after I saw the first episode. In case anyone is wondering, Benoît Magimel leads the scale with 10 out of 10 points.

Months passed and I was eagerly following every bit of news the above mentioned Twitter account posted with a feeling of excitement and something like fear. The big question was how accurate would they be? How much fiction would there be? I feared the worst, because I’m the kind of person who pays great attention to little things and sometimes these little things can ruin the whole experience. Actually it happens quite often. I guess my standards are too high sometimes. Especially when what I watch is about what it so very dear to me.

I learned that this show would be about Louis’ dream of building Versailles, and it would feature pretty much all the people I sometimes call my babies. Of course it inflicted the fear that these people might not be portrayed in the way they were to make it more entertaining for the audience. Our world is fast and wants to be entertained, wants to see stories being told and most don’t really care if what they see actually happened that way or not. Just look at Reign.

Now, as I write this I have seen some episodes of Versailles already and have formed an opinion, I struggle whether to post this not. It is quite personal after all, and I am not really a person that finds joy in praising or criticizing. I also struggle with whether I should do reviews of each episode or not. I would never dare to call myself a proper historian, I’m a person with a passion for something which has collected a certain knowledge about this something, but far from knowing all, and the actual idea I had for these reviews mid this year was to compare what was shown on the show with what really happened, as far as I know, and maybe provide some background info for it. By now I have seen some people stating their opinions on the historical accurateness of the show, which is the reason for my struggling. I simply don’t want to upset anyone with what I might say and I know that might be the case with some of the things I have to say…. I don’t want to bash anything, believe me…. and I guess in the end I will write these reviews and maybe some people will even read them, hopefully. I will do it because these dead people are dear to me and so is the time they lived in.

I will refrain from commenting on costumes and such things and try to focus on providing a historical background for what is shown, in which year it happened, who was involved, what people thought of it. It will mainly focus on Louis, Philippe, and le Chevalier, because those are the three I did the most research on during the years. It will include my thoughts on the characters as they are portrayed and compare it to what I have learned about them during the years, as well as some facts about etiquette, their lifestyle, and whatever else I notice. 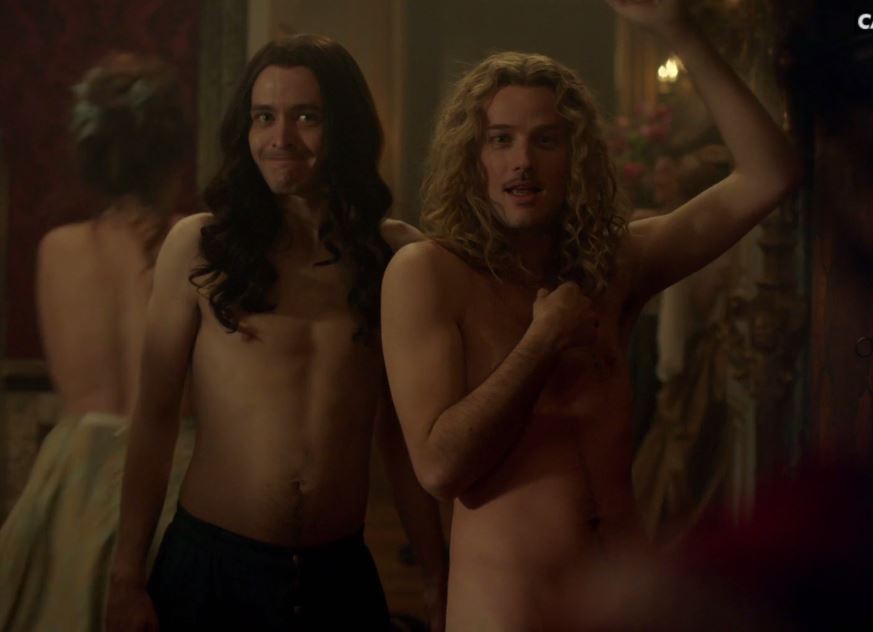