Theme License is not active! Please Activate it now to get started or if you don't have one - Buy it now.
Anne-Lucie de la Mothe-Houdancourt, Marquise de La Vieuville – Party like 1660
Party like 1660

In care of her father, she grew up well-educated. Aged fifteen, Madame de Créquy called her a blonde beauty, sharp, bold, a bit cheeky and an expert in coquetry. At the beginning on 1662, as Louis XIV was involved with Mademoiselle de La Valliere, he also began to ogle Mademoiselle de la Mothe-Houdancourt.

Apparently, it was the doing of the Comtesse de Soissons according to Mademoiselle de Montpensier. The Comtesse, who shared the bed of the King in the past, was intriguing with Henriette d’Angleterre. Both of them did not like Mademoiselle de La Valliere, who they had pushed into favour in a intrigue-gone-wrong, much and wanted to provide distraction in form of Mademoiselle de la Mothe Houdancourt.

Anne-Lucie was a fille d’honneur to the Queen at that point and inspired quite the passion in the King’s inguinal region. So much, that he was willed to climb chimneys and facades.

Bussy-Rabutin notes the King saw Anne-Lucie, who was very playful, pleasant, and a witty beauty, often and sighed enough to make everyone believe he was in love with the girl. But the girl’s feeling were torn between Louis and the Marquis de Richelieu, with a preference for the latter. Thus she apparently did not “give in” and that made her lose the King’s interest…. because Mademoiselle de La Valliere “gave in”. Anne d’Autriche, the King’s mother, got involved too. She apparently preferred Louise over Anne-Lucie, because Louise wanted to remain in the shadows and thus would not bother her daughter-in-law that much.

Mademoiselle de la Mothe-Houdancourt was then dismissed from her position by Anne d’Autriche and ordered to leave court under the pretext of all illness. An anonymous letter written to a friend of Nicolas Fouquet, states two possible reasons for it that circulated at court: Either the Marquis de Richelieu broke with Anne-Lucie, which then made her write him an angry letter and that letter was intercepted. Or the Marquis de Richelieu broke with Anne-Lucie, but then wanted to continue the flirting and was caught via the means of a tender love-letter. Both versions end with Anne-Lucie wishing to enter a convent.

The general blame was put on the Marquis de Richelieu, but Anne-Lucie had yet another gallant. The Comte de Gramont, who apparently got a bit clingy as he saw what interest the King had in her and said some not too kind words about her.

Anne-Lucie was already thirty as she finally married, but the groom was neither of the gentlemen which had courted her. She married the Marquis de la Vieuville, chevalier d’honneur de la reine. With him, she had four children, three daughters and one son.

On February 22 in 1686, Anne-Lucie died at Versailles, aged forty-one or forty-two. 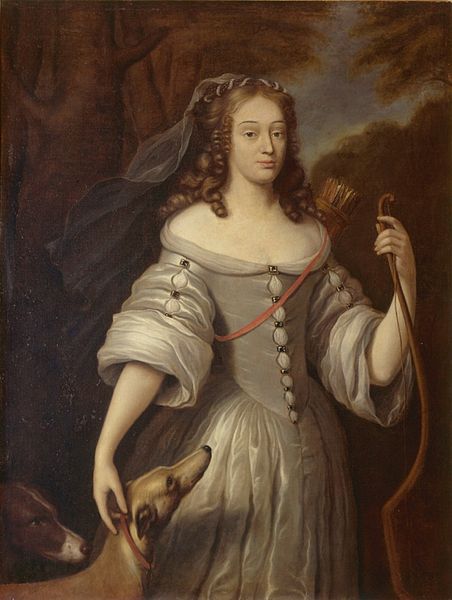