1 January, the King and the Queen visit the Ursulines of Saint-Cloud for their devotions, before returning to Paris. Having returned to Paris, his Majesty, in company of Monsieur, the Prince de Condé, the Ducs de Vendôme and d’Enghien, as well as fifty Chevaliers du Saint-Esprit, proceeds to the church of the Feuillants. His Majesty, wearing the grand collier of the Ordre du Saint-Esprit, then attends the grand mass at the Feuillants. Afterwards, his Majesty sets out for the Grande-Écurie, where he heals many afflicted by illness with his touch. Le Roy te touche et Dieu te guerit. In the afternoon, their Majesties go to attend the sermon of the Bishop de Noyon.

5 January, his Majesty receives the ministers, ambassadors and envoys, who have come to state their condolence upon the death of Princesse Anne-Èlisabeth, second child and first daughter of their Majesties. After which his Majesty grants an audience to the Marquis de Senantes, who is the envoy of the Duc de Savoie and his mother Christine de France, his Majesty’s aunt.

6 January, Épiphanie, his Majesty invites to a banquet at the Louvre, after which Monsieur Molière’s new play L’École des femmes is performed. His Majesty, her Majesty the Queen-Mother, Monsieur and Madame are mightily amused by it.

8 January, their Majesties receive Monsieur du Moulin, extraordinary equerry of her Majesty, who has just returned from Madrid and brings with him letters from her Majesty’s father, the King of Spain. The court gathers for the Ballet des Arts, which was written by Monsieur de Benserade, with music written by Monsieur Lully and Monsieur Lambert. His Majesty dances in the Ballet des Arts and is very much admired by all the court, the ministers, envoys, ambassadors and foreign gentlemen present. The Ballet des Arts is a great success and everyone participating, among them Madame, the Mesdemoiselles de la Vallière, de Tonnay-Charente, de Saint-Simon, and the Messieurs de Beaufort, d’Armagnac, de Villeroy, are celebrated.

16 January, his Majesty reviews his Mousquetaires in front of the Louvre.

18 January, at council, his Majesty decided to consider Monsieur Riquet’s draft for the planned Canal du Midi. After council, the King receives the deputies of Rennes, whom he had summoned and are represented by the Marquis de Coëtlogon, who is the governor of the town.

20 January, his Majesty receives Prince Christian of Denmark, oldest son of the King of Denmark and Norway, Frederick III. Tonight, his Majesty invites to a comedie, performed in her Majesty’s apartment.

21 January, his Majesty rises early and rides to Versailles for the chase. In the evening, their Majesties attend a ball hosted by Monsieur, which is followed by a buffet of snacks.

22 January, what a scandal! A duel took place yesterday by the Tuileries and persons of quality are involved! Talk has it one gentleman died. Duels are strictly forbidden since the time of the late Louis XIII. Leaving the Tuileries, where Monsieur had hosted a entertainment, the Prince de Chalais and the Marquis de la Frette began to quarrel and scuffle. The Marquis de Noirmoutiers, brother-in-law of the Prince de Chalais, and two gentlemen of their company, stepped in and blows were exchanged, which resulted in a challenge. And thus, the eight gentlemen met at Pré-aux-Clerc the following morning. The Prince de Chalais was seconded by the Marquis de Noirmoutiers, the Marquis de Flamarens and the Marquis d’Antin. The Marquis de la Frette was seconded by his brother d’Amilly, the Vicomete d’Argenlier and the Chevalier de Saint-Aignan. The duel ended with the Marquis d’Antin dead on the freezing ground, killed by the Chevalier. The Prince and the rest of his companions were seriously wounded. His Majesty is very furious. It is said the Marquis de Mortemart is worried this duel might reflect badly upon him and his daughter, Mademoiselle de Tonnay-Charente, who was meant to marry the Marquis de Noirmoutiers soon. His Majesty receives Monsieur Sehested, ambassador of Denmark. This evening, the Ballet des Arts will be performed once more.

23 January, it appears the gentlemen involved in the duel have vanished. It is speculated they race for the border to save themselves from his Majesty’s justice. His Majesty recommended they should all be executed.

24 January, it is said that Mademoiselle de Tonnay-Charente has received a visit from the Marquis de Montespan, whose brother d’Antin, was killed in the duel.

25 January, their Majesties attend the chapel of the Louvre for the sermon of Pere Flour. After which his Majesty sets out to hunt in the surroundings of Vincennes. Tonight, his Majesty will dance again in the Ballet des Arts.

26 January, his Majesty reviews a regiment of his Mousquetaires.

27 January, it is said the Marquis de Montespan seeks the company of Mademoiselle de Tonnay-Charente every day. One mourns the loss of a brother, the other the loss of a fiance. Their Majesties, Monsieur and Madame, attend a performance of Monsieur Cornielle’s Sophonisbe by the Troupe Royal in the Queens apartments.

28 January, his Majesty sets out for Versailles to enjoy a promenade. Having returned from Versailles, his Majesty grants an audience to the ambassador of Venice and the envoy of the Prince d’Orange. Monsieur invites to a ball and snacks. His Majesty attends in good mood.

29 January, the Marquis de Noirmoutiers, is it said, is on his way to Portugal. His Majesty has exiled him and the rest, who fled his Majesty’s justice. The Ballet des Arts is performed once more today.

30 January, talk has it that Monsieur de Montespan looks very favourably upon Mademoiselle de Tonnay-Charente. She, it is said, shares his feelings.

31 January, his Majesty and Madame host a ball in the grande salle des gardes of the Louvre. It is well attended. 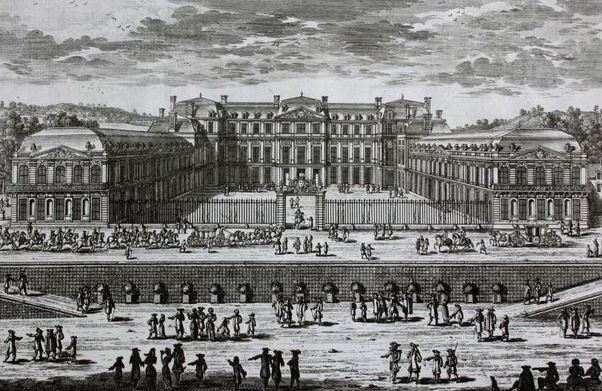