4th. — This evening at nine o’clock the Dauphine passed into the King’s little apartment and no courtier was admitted. There was a lottery, consisting of three thousand tickets, among which there were twenty-four prizes, four of silver, and twenty of jewels. The lottery was drawn both before and after the supper given by his Majesty to the ladies who drew. Seventeen sat down to table, the King, Monseigneur, the Dauphine, the Princess de Conti, Mademoiselle de Nantes, Mesdames de Montespan, de Maintenon, de Thiange, d’Arpajon, de Rochefort, de Monchevreuil, and de Bussy, and Mademoiselles de Biron, de Rambure, de Levestein, de Grammont, and Hamilton.

8th. — The duke of St. Albans, natural son of the King of England by Miss Gwyn, an actress, was presented to the King. The Queen-dowager allowed him a pension without which he could not subsist.

12th. — It was arranged this day that the Doge should have his audience on Tuesday. Marshal Humieres was appointed to meet the Doge at Paris and to conduct him hither to his audience.

15th. — The King entered the gallery at eleven o’clock. He had caused the throne to be placed at the end, on the side next the apartment of the Dauphine. He ordered that privileged persons should enter through his little room, and the other courtiers by the grand staircase. The large apartment and the gallery were filled at noon. The Doge entered with the four senators and a number of other persons forming his suite. He was dressed in red velvet and wore a bonnet of the same. The four senators were dressed in black velvet with bonnets of the same. He spoke to the King covered, but frequently took off his cap. He did not appear embarrassed either at this or any of the audiences during the day. After the King had answered, each senator spoke to his Majesty, and whilst they were speaking, the Doge, like them, remained uncovered, nor did they put on their caps when the Doge spoke. The King had permitted the Princes to be covered during the audience, but they uncovered as soon as the Doge had finished speaking, because he did not again put on his cap. He was received and treated as ambassador extraordinary. After dinner he visited Monseigneur, the Dauphine, the Duc de Bourgogne, the Duc d’Anjou, Monsieur and Madame, Monsieur de Chartres, Mademoiselle de Chartres, Mademoiselle de Montpensier, Madame la Grande-Duchesse, Monsieur le Duc, Monsieur de Bourbon, Madame de Guise, Madame la Duchesse, the Princess de Conti and Madame de Bourbon. He did not see the King’s children. There was a great crowd wherever he went, especially at the Dauphine’s, where there was some confusion and a few mirrors broken. His arms are emblazoned upon his coach in the principal places and there are also separate escutcheons bearing the arms of the four senators. He is of the Imperiali family and is named l’Ercaro, being the heir of that house, which had been adopted into the Imperiali family and is of the ancient nobility. The last of the Ercaros, out of gratitude, be queathed his property to an Imperiali, the ancestor of this one, on the condition that he should bear the name of Ercaro, together with that of Imperiali. The Doge has not seen Monsieur De Croissi, although all ambassadors extraordinary have interviews with him. The reason he assigns is, that he had nothing to negotiate about and that therefore it was not necessary for him to see the Secretary of State for foreign affairs. He contended that the Secretary ought to visit him first. The Princesses of the Blood were on their beds when they received his visit, that they might not have to wait on him to the door. He was much delighted at the Princess de Conti’s, and, as he looked at her a long time very intently, one of the senators said to him, ” At least, Sir, remember you are Doge.”

16th. — Quinault brought the King, while at Madame de Montespan’s, three subjects for the operas this winter. One was Macaria, daughter of Hercules, the second, Cephalus and Procris, the third Annida and Rinaldo. They were all to the King’s taste, and he chose that of Armida.

17th. — Monsieur de Louvois informed us that the King had just determined upon the square which he in tended should be made at Paris, on the present site of the Hotel Vendome. He therefore takes the convent of the Capuchins. This square will be the finest in Europe, and will cost the King a mere trifle, from the ground which he will dispose of. It will be wider and much longer than the Place Royale. It was expected that the Doge would have attended the King’s levee, but one of the senators having been taken ill, retarded the Doge’s departure from Paris. So that the levee was over when he arrived here. He saw the apartments and upon quitting the cabinet of Monseigneur, said “A year ago we were in hell, and now we are leaving Paradise.”. A magnificent dinner was given them in the apartment of Mademoiselle. Monsieur de Monaco, Monsieur Tilladet, and I dined with him and the three senators who accompanied him. Upon quitting the table he adverted slightly to the misfortunes of the republic last year and said to us “Le grazie del re mi fanno scordar le disgrazie delta ma patria.” “The King’s favours make me forget the disgrace of my country.” He then walked round the canal, saw Trianon and the Menagerie, and upon returning to Paris, observed, that his regret at being obliged to leave France so soon, was as great as that which he had experienced in being obliged to come there. The Doge was present at the King’s dinner, who conversed much with him and with the three senators who continually accompany him, and whose names are Tomelin, Zaribardi, and Durasso. Saluogo remained ill at Paris. He is to visit Versailles again before his audience of leave and is very desirous of seeing a ball.

19th. — The King intimated that he wished the carousal to take place on the 1st of June and named the four eldest marshals of France for the judges. These are Monseiur de Crequi, Monseiur de Bellefonds, Monseiur de Humieres and Monseiur d’Estrade, for the senior Marshal Villeroy is incapacitated. It was determined that there should be a grand ball in the be ginning of the week, in order that the Doge might witness the French dances, and that the dancers should go out of mourning on that day. Marshal Humieres has been appointed to wait upon the Muscovite ambassadors at Saint Denis to conduct them to Paris and thence to their audience at Versailles. These ambassadors are men of birth. In general the Russians only depute people of the lower class, whom it is their intention to enrich, and who frequently purchase the office with money. Their expenses being defrayed by all Christian Princes, and because in these journeys they dispose of their merchandize.

21st. — At noon the King received the Muscovite ambassadors in his grand apartment, seated on his throne. There are two of them and they have a suite of fifty persons, among whom are some even of distinguished rank. They have only seen the King, Monseigneur and the Dauphine. They were present at the audience in order to see them. They play chess admirably, and consider our best players as but indifferent ones.

22d. — The Doge attended the King’s levee. He entered before the King had put on his chemise and he remained till the end of the levee, as well as the three senators who had come with him. The fourth still continued ill. Upon quitting the King’s levee, the Doge went to visit the stables and then waited in my apartments for the hour when the Dauphine would be visible. He called upon her before the hairdresser had finished his office and then followed the King and her to mass. He and the senators were below in the chapel and mingled in the crowd of courtiers. He dined with the King, in the council chamber and my brother and I dined with them. About five o’clock they went to walk in the gardens, and saw the fountains, which played wonderfully well. At nine o’clock they entered the King’s grand apartment and in the gallery room found all the ladies dressed and seated ready for the ball. Dancing was kept up till midnight. I never saw so magnificent an assembly. They returned to sleep at Paris. The King went to speak to them at the commencement and end of the ball, and the Dauphine, upon quitting, paid them many civilities. The same day we learnt that the Princes de Conti had seen the Elector of Bavaria near Augsburg. That they had supped with him and that the next day he had dined with them, and that they had promised each other to proceed to Hungary together, and not to quit each other all the campaign. The interviews passed without much ceremony and upon a footing of equality. This change in their determination displeased the King and has afflicted Monsieur le Prince very sensibly, who had assured the King that they were going into Poland, they having informed him that they would follow his advice.

25th. — Monsieur le Duc and the Duc de Bourbon paid a visit to the Doge, who went in his dress of ceremony to visit the Princess de Carignan. He had made a few objections, because she had married a Prince of Italian extraction.

26th. — The Doge came in his habit of ceremony to take his audience of leave of the King and he neither saw Monseigneur, nor the Dauphine, nor any member of the royal family. The King gave the Doge a magnificent miniature box, and some very handsome and valuable Gobelin tapestry. He also gave to each of the senators his portrait enriched with diamonds, as well as some hangings of Gobelin tapestry, but not so handsome as those of the Doge.

27th. — The King reviewed the King’s regiment and the Dauphin’s. He was very well satisfied with them and made some considerable largesses to his own regiment, after which he said to Monsieur de Louvois, ” I find my regiment in such excellent order, and am so satisfied with it, that I have a great mind to embrace Monchevreuil ( the colonel of the regiment).”

29th. — The death of the Elector Palatine, brother of Madame, has just been announced. That branch is now extinct and the Electorate falls to the House of Neubourg. The Elector who is just dead had been reconciled about a month to his mother and his wife. The former is of the family of Hesse Cassel, the latter is sister to the King of Denmark. The Doge set off yesterday from Paris and the senators leave either today or tomorrow, Lyons is their rendezvous. The Republic sends three galleys to Toulon, under the command of Centurione, to convey the Doge back to Genoa.

30th. — The King, Monseigneur and the Dauphine went to Saint Cloud to condole with Monsieur and Madame on the death of the Elector Palatine. The King put off the carousal till Monday and obliged Monseigneur to promise to be present. Madame is in the greatest affliction.

31st. — Upon a calculation being made of the number of labourers here and in the environs of Versailles, they have been found to amount to more than 36,000. 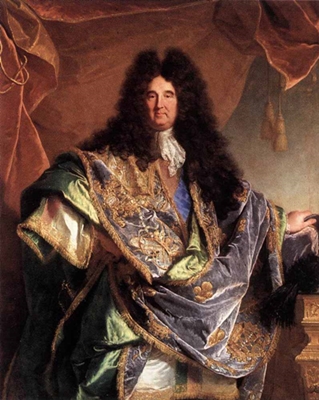