Theme License is not active! Please Activate it now to get started or if you don't have one - Buy it now.
Élisabeth-Marguerite d’Orléans, Duchesse de Guise, d’Alençon et d’Angoulême – Party like 1660
Party like 1660

Élisabeth-Marguerite d’Orléans was the second born daughter to Gaston de France, brother of Louis XIII, and his second wife Marguerite de Lorraine. She was born on 26 December in 1646 in what was then the Palais d’Orléans and is now the Palais du Luxembourg. 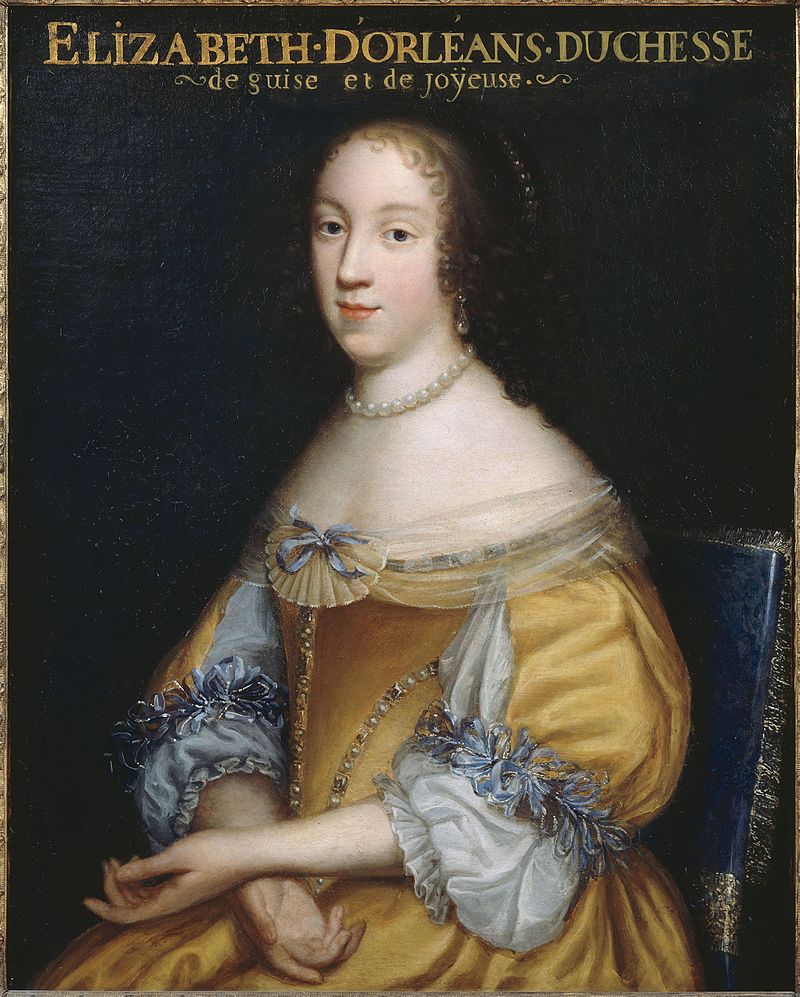 As grandchild of a King, Élisabeth-Marguerite was a Royal Highness and known at court as Mademoiselle d’Alençon before her marriage. As she grew older, she started to refer to herself as Isabelle, and signed letters as such, instead of using her full given-name Élisabeth-Marguerite.

Mademoiselle d’Alençon inherited the very rich, very noble and very prestigious Abbaye de Remiremont from her aunt Catherine de Lorraine as she was only two years old. Catherine de Lorraine was a daughter of Charles III de Lorraine and Claude de France, herself a daughter of Henri II de France and Catherine de Médicis. Catherine’s mother died as she was two years old and apparently she made her mind up this very moment to devote her life to God. She became Abbess of Remiremont in 1611 and named her niece, Marguerite de Lorraine, coadjutrice in 1618… but Marguerite de Lorraine later married Gaston de France and thus was not fit for the job anymore. Mademoiselle d’Alençon became the new coadjutrice and succeeded as Abbess in 1648. As two-year old Abbess, Isabelle received bit of a different education compared to her sisters and spent plenty of times in convents. In 1655 however, Marie-Anne de Lorraine, still a child herself, took over the Abbess duties.

For a time, it was thought that Isabelle’s older sister Marguerite-Louise might marry the young Louis XIV and also their half-sister Anne-Marie was up to the task, but Louis married Spain. Marguerite-Louise ended up as Grand Duchess of Tuscany, Anne-Marie married a mere nobleman in secret, and their younger sister Françoise-Madeleine became Duchesse de Savoie.

So, with two sisters legally married, plenty of gentlemen hinted their willingness to marry or have their sons marry Isabelle. One of the suggested candidates was Henri-Jules de Bourbon and Isabelle can count herself lucky not to have married him in the end. The idea was dismissed and Henri-Jules married Anne de Bavière instead, whom he mistreated badly.

As a Lorraine, Isabelle’s mother looked favourably on the suggestion made by another Lorraine. Marie de Lorraine, known as Mademoiselle de Guise, was the guardian for her nephew Louis-Joseph, whom she raised after his own mother had been confined for mental illness. This Louis-Joseph became the Duc de Guise upon the death of his uncle and Mademoiselle de Guise had the legal say over the boy… as it happened, he was the last male of the senior Guise branch of the House of Lorraine. Mademoiselle de Guise was eager to keep the branch alive and also to raise it to its former glory again, which had been a bit usurped by other Lorraine-branches… like the Armagnacs. Thus it was suggested Isabelle, a Royal Highness, should marry the lower ranking Louis-Joseph, just a Highness, but keep her status.

Everyone agreed. Mademoiselle de Guise was delighted to welcome a Royal Highness into the family, even though, as it was remarked, this Royal Highness was not the most handsomest of the sisters and had a bit of a hunchback. The marriage took place in 1667 at Saint-Germain. (Depending on where you look, the date is given as 5 May, 15 May, 15 June or 15 October.)

The newly weds moved into the splendid Hôtel de Guise, which just recently had been renovated on orders of Mademoiselle de Guise, and lodged on the first floor, while Mademoiselle de Guise had her rooms on the ground floor. The young Duc, four years younger than his bride, remained under legal control of Mademoiselle de Guise. The latter continued her mission to restore the name of Guise to its former glory and trained her nephew to act a proper nobleman… which wasn’t always easy. Isabelle, now known as Madame de Guise, always made sure she received what she was due to her high birth and as member of the royal family, even if it was at the cost of her young and actually high-ranking husband. The Guise were prince étrangers and that made them rank pretty much straight under the royal family. In private, she treated him as her inferior and she did not care much either in public if she was putting him in embarrassing situations.

According to Saint-Simon, the couple had quite the dinner ritual: “Every day at dinner he would hand his wife her napkin and after she had sat down in her armchair and unfolded her napkin while Monsieur de Guise remained standing, she would give orders that a place should be set for him. The necessary items were always kept in readiness on the buffet, and now they could be set at the far end of the table. Everything was done, day after day, with the same scrupulous attention to detail, without diminishing the lady’s rank one iota or raising that of Monsieur de Guise despite his august marriage.” Madame de Guise was quite fond of her armchair and never permitted Monsieur de Guise to sit on one in her presence apparently. He had to made do with a folding chair. Madame de Guise applied the same to members of the Church and ambassadors, who apparently had to stand for hours in her presence without ever being offered a seat.

As haughty as she was, Isabelle was also very good-hearted, polite and spend hours every day with praying. She regularly retired to the Trappist monastery and became its patron.

Thanks to Mademoiselle de Guise, who did what she could to advance her nephew’s career, the young Duc gathered quite the court around himself and also gained Louis XIV’s esteem. He was granted the honour to be at the King’s side for military reviews. Isabelle gave him a son, François-Joseph, on 28 August in 1670 and it looked like the Duc would soon bring his family glory. He set out in 1671 to pay a visit to Charles II in England and was well received…. but then, as he returned, he fell suddenly ill. It turned out to be smallpox. The Duc died not yet aged twenty-one on 30 July in 1671.

François-Joseph became the new Duc de Guise… and he would be the last one of the senior-branch. The widowed Isabelle moved into the Palais d’Orléans in 1672 and also had a private apartment created at the Abbaye de Montmartre, where she spent plenty of time. Her son was her pride… unfortunately he was rather sickly. Due to that, the little Duc was still unable to walk as he four years old and had to be carried… and disaster struck again. While being carried by his nurse, said nurse dropped the little boy and he hit the ground at such an unfortunate angle that he died from a head injury not yet five years old.

The Dukedom of Guise went to Mademoiselle de Guise, who had outlived all male relatives of the senior line. After her death in 1688, it went to the Condé branch of the House of Bourbon via Anne de Bavière, who was a third cousin to little François-Joseph via her mother Anne de Gonzague.

Isabelle could not stand to remain for long in the Palais d’Orléans, for it was were her son had the tragic accident, and renounced all entertainments, of which she was never too fond, and splendour to reside mainly at the Abbaye de Montmartre… but since it was her, so she argued, even convent-life had plenty of style no matter what. In fact, although she renounced court-life, all its vanities and responsibilities, urged others to do likewise, she still insisted that she was paid the respect her rank was due. She was joined there by her oldest sister and also Mademoiselle de Guise visited frequently.

Having her life devoted to God, Isabelle became a strong supporter of Louis XIV’s forceful attempts to return the French Protestants to the one true religion. As such she supervised the conversion of a Protestant lady in 1676 and commissioned Marc-Antoine Charpentier, then composer of Mademoiselle de Guise, to create oratorios fitting such occasions. In 1685 Isabelle had a house for new converted Protestants built in her duchy of Alençon and actively involved herself in the conversion of the locals.

Madame de Guise gifted the Palais d’Orléans to Louis XIV in 1694 and thinking that her end might come soon, insisted that when the time has come not to be buried among her royal relatives at Saint-Denis, as her birth entitled her to be, but to be buried among the nuns of the Faubourg Saint-Jacques in Paris. She died on 17 March in 1696 and bequeathed her vast fortune to her only still living sister Marguerite-Louise. 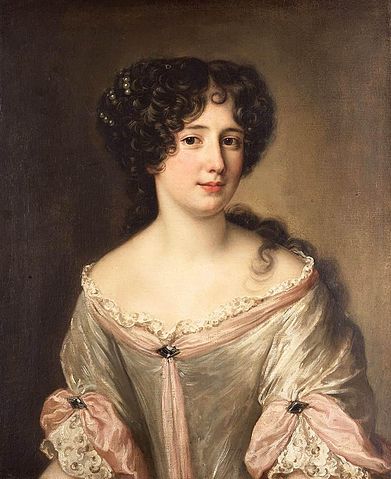 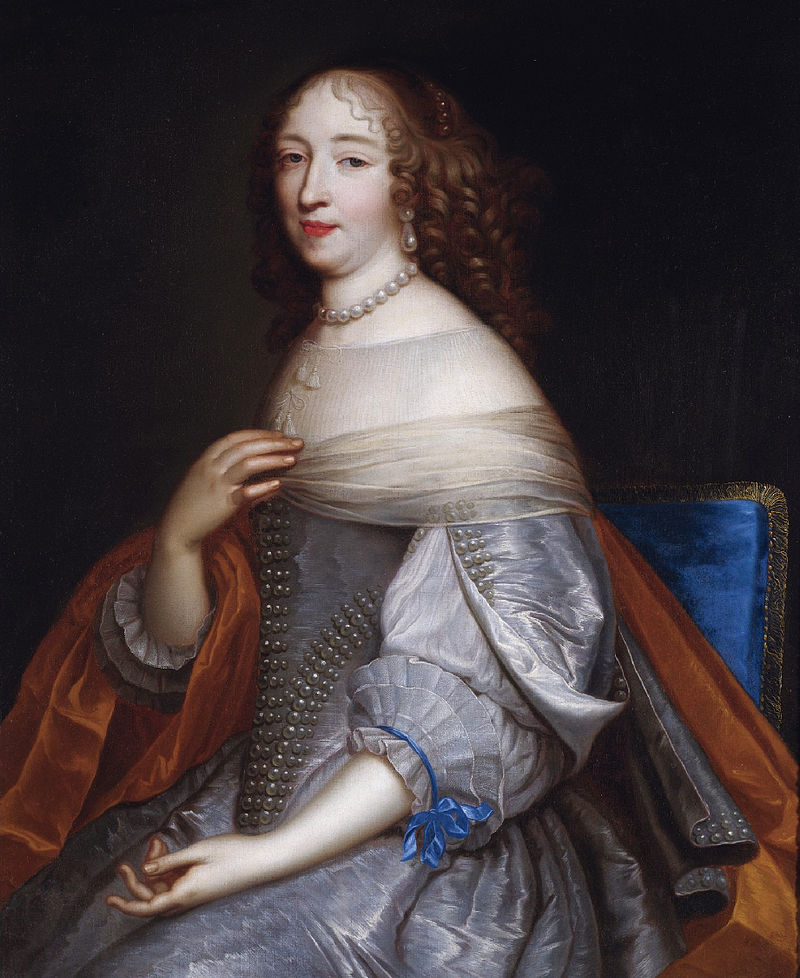