Theme License is not active! Please Activate it now to get started or if you don't have one - Buy it now.
Le Trianon de Porcelaine – Party like 1660
Party like 1660

In the 1670’s, as the palace of Versailles was still in the making, its park bordered on a little village called Trianon.

Trianon, or Triarnum as it was called in a papal bull of Alexander III, was small but a quite old settling. While Louis XIII left it untouched as he outlined the original plans of Versailles’ gardens, Louis XIV had other intentions. He bought the whole area between 1662 and 1665, wishing to integrate it into the planned, and way larger than the original, gardens. For that Louis ordered the whole village to be destroyed in 1668 and had its cemetery relocated in 1670.

By then Louis had a plan what he wanted to do with the side formerly occupied by the village. He wanted to create a place where he could enjoy a bit of privacy. His dream of Versailles included drawing all of the French nobility to live at the palace or the village of Versailles and that worked out quite well… but even the Sun King needed a bit of privacy once in a while… especially when women were involved. The woman who had stolen the King’s heart around that time, was Madame de Montespan and Louis’ desire for her was enormous. Thus he wanted a place, where he could meet, and enjoy, his Goddess Athénaïs in a relaxed atmosphere without the always present danger to be interrupted or discovered.

Louis XIV entrusted his architect Louis Le Vau to design a little oasis for him. Not too large, but not too small either. And most important of all, the place should be able to provide all sorts of culinary delights, for both Louis and Madame de Montespan enjoyed to eat. The Chinese style was currently in fashion, inspired by tales of the Porcelain Tower of Nanjing, so Louis wanted it to be a bit exotic as well to fit the current fashion.

François d’Orbay, a celebrated architect, was to build the whole thing after the plans of Le Vau. Five pavilions were created on the former location of the church of Trianon. The centre pavilion, called pavillon du roi, was meant for the King’s usage and flanked by four smaller pavilions meant to provide snacks and refreshments. All of them furnished in the Chinese style and covered all over with tiles, which gave the whole thing its name, Trianon de Porcelaine. 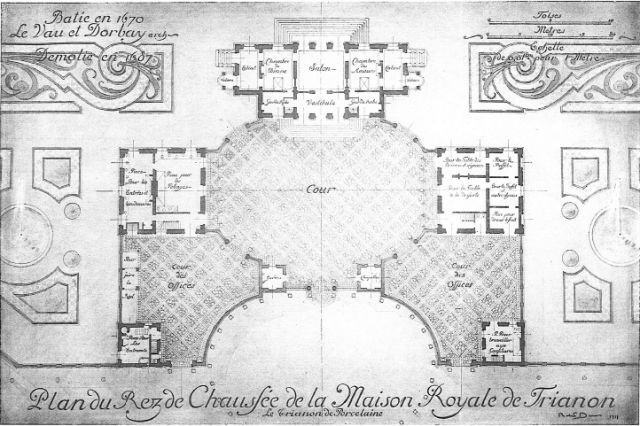 Those tiles were not actually made of porcelain, but faience tiles and made in Rouen, Nevers, Lisieux and Saint-Clément. Some were even imported from the Netherlands. Porcelain or not, the newly constructed oasis looked rather impressing and it even had something like a barbecue installed in one of the courtyards. Fancy that.

While there are etchings and engravings showing the outside of the building, there are hardly any sources on how the inside looked. What is known, is that the pavillon du roi was relatively small and its ceilings were decorated by François Francart and his brother Gilbert. The floor was paved with faience and the pavilion had a central salon measuring 6,7 metres x 5,7 metres. This central salon was connected to two small apartments, called the Appartement de Diane and the Appartement des Amours, which each had a fireplace, a large bed and an enclosed closet.

The decorations, furnishing and stuccos were all painted blue and white to match the tiles covering the building. The bed of the Chambre des Amours, in the Appartement des Amours, was made of carved gilded wood and featured several expensive Venetian mirrors. The walls decorated with idyllic scenes of flowers, birds and shepherds. Perfect for romantic King-to-mistress contact.

The Appartement de Diane was kept in the same blue and white style, but here the walls were decorated with Chinese tapestries.

As mentioned, the remaining four pavilions provided culinary delights for the King and Madame de Montespan. One was reserved for the preparation of desserts, one for jams, one for soups, starters and hors d’oeuvres and the last one, for all things fruit.

The Trianon de Porcelaine was not meant to be constantly occupied. It was a small private residence, where one could stay for some hours, or even a day or two, but it lacked the infrastructure and space for longer stays… but it was perfect for small entertainments and those were hosted there frequently.

Only a selected few were allowed to set their feet inside, of course, and all of them left utterly enchanted. As André Felibien said: “A little palace in an extraordinary style, and the perfect place to pass the time on a summer’s day.” The gardens surrounding the Trianon de Porcelaine were just as impressive and filled with rare flowers and fruit trees. Louis XIV loved flowers and to add to the porcelain impression, he even had the flower pots painted to resemble the tiles and made them look as if they were also made of porcelain. There was even a Cabinet des Parfums, a small structure purely for the purpose of collecting essences from the Trianon flowers, and in winter, the areas that hosted the fruit trees could be covered with removable greenhouses for their protection.

There was only one problem… the tiles that covered the whole building did not like the French weather too much. As the years passed, they showed signs of weathering, split and cracked open, or simply fell off completely. 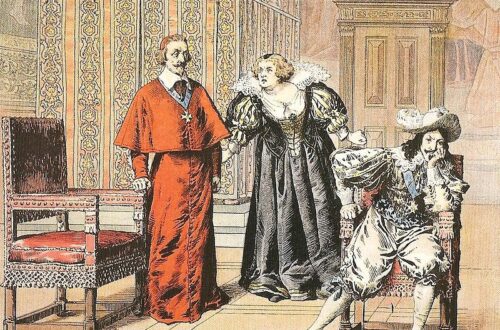 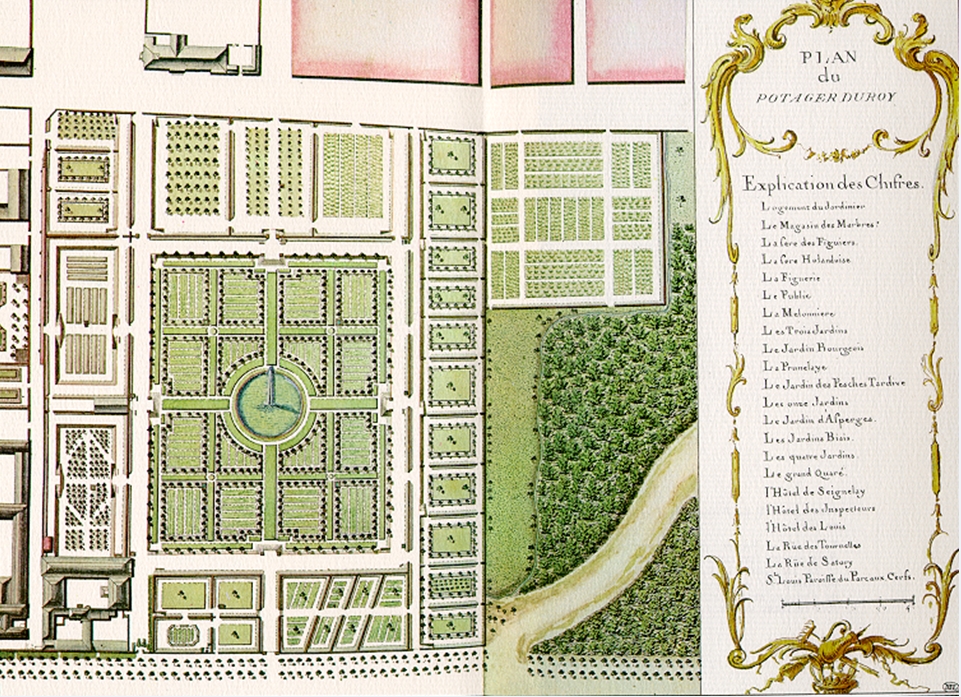