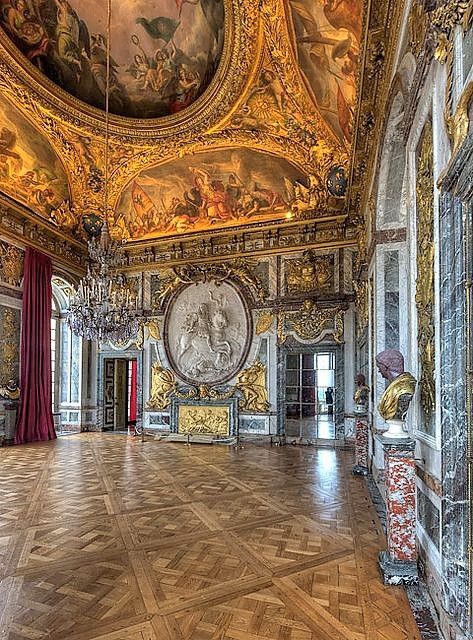 We already talked about general hygiene at Versailles, now let’s talk about the general living conditions… and they were not great. Sure, Louis XIV and his family had all sorts of comforts, an army of servants, and plenty of space, but this did not apply to the court in general. The royal family, meaning King and Queen, their children and grandchildren, along with the family of Monsieur, the Condé and Conti families, as well as various mistresses and all their servants, occupied 150 rooms in the middle part of the château.

They had their set rooms, the precise location varied over the years, but they did actually have rooms. This was not the case for everyone entitled to live at court. There were countless of nobles with positions at court and although Versailles is positively huge, there was no way to host them all… and if one did not belong to the lucky few, or rather the important few, one could not expect a glorious apartment. One had to be happy with a small and cold room.

Not all office holders were constantly at Versailles to serve their King, they served in terms, yet it was already hard enough to fit everyone in who had to constantly serve. Those with an office, had to be hosted by the King, since that was quite difficult, only some of them actually got to live at Versailles. Most had to do with a room in some side-building. One could also receive money in order to rent a room in town. Every office holder, of course, came with at least one servant. Versailles was constantly crowded and people had to share tiny rooms or apartments with others, leaving them hardly any privacy.

Living at Versailles was so very prestigious, that people preferred it over more spacious quarters in town, or their own hôtels and chateaux. While someone like Madame de Montespan had a whole apartment, some noble ladies had rooms as big as a boxroom and they shared this room with another lady. There were no painted ceilings, no gilded doors, no expensive wall-hangings…. but it was Versailles, thus a Duchesse was happy to be placed in a broom-chamber sized room beneath the roof, extremely hot in summer and ice cold in winter. 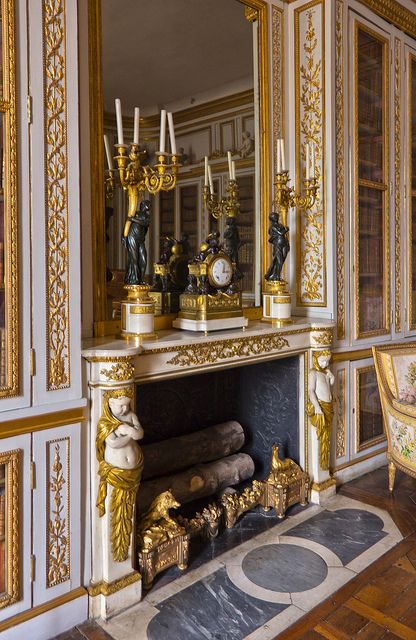 Madame de Stall, a femme de chambre of the Duchesse du Maine, described her living situation at Sceaux and Versailles like this: “I was astonished, at seeing the dwelling-place assigned me. It was an entresol, so low and dark that I had to stoop when I walked and feel my way about. One couldn’t breathe for want of air, or warm oneself for lack of a fireplace. The cold was beginning to make itself felt, and we had only one garde-robe between the four of us, in which to warm ourselves, but I preferred the cold to the ill-temper and insipid conversation of my companions. I used to shut myself up in my “cave” and console myself by reading. I hadn’t even got this hovel to myself: the premiere femme de chambre, who passed her nights in the Duchesse du Maine’s bedroom, shared it with me in the daytime. She had her hours for sleeping, and, as she was married, it was the only place where she could see her husband in private. At such times I had to take up my quarters out of doors in a bosquet. If it was wet or cold I had no refuge but the galleries. My room at Versailles, where we passed the winter, was even more intolerable. No ray of sunlight had ever penetrated into it. A companion, more unsociable than the one I had had at Sceaux in the summer, was there day and night. The want of space led to continual disputes, or the smoke compelled us to leave the room altogether.”

Personal needs played no role at all for the assignments of living quarters. Those who needed to attend master or mistress at all hours, lived relatively close. Those who did not need to attend at all hours, where put according to their rank where-ever there was space. If someone had to be relocated to a different room, this usually let to a set of relocations and it often happened that someone ended up without room in the end and had to wait for one to become free. Once, Madame de Pompadour wished to have a friend as neighbour and in order to achieve this, the inhabitants of ten apartments had to be relocated. Unless they were part of the royal families, there was no space intended for babies, children or teens.

Something Louis XIV would most certainly envy every single one of us, is central heating. The royal apartments, with their high ceilings, were never warm in winter. They had huge fireplaces, but that did not actually do much due to open doors and windows that did not close properly. As Liselotte von der Pfalz reports on 5 March 1695: “It is so cold here that at the king’s table wine as well as water froze in the glasses.” Saint-Simon writes that the winter of 1709 was so cold, the “strongest elixirs and the most spirituous liquors” froze in their bottles.

… and not everyone had the pleasure to have a fireplace either. Another problem with the fireplaces, were their chimneys. They were often not large enough to allow the needed ventilation of air or, if it was windy, the smoke would be blown back down through the chimneys and envelop everything in smoke. The Marquise d’Onnisan, for example, wrote several letters complaining about her fireplace. She writes how her not properly functioning fireplace would cloud her whole bedroom in smoke and turn her furniture black. Then there is the Comtesse de Tessé complaining of a different fireplace problem. In her case, the chimneys of her apartment allowed too much rain in and made the parquet rot.

Having an apartment at Versailles, did not mean that one could make said apartment homey by doing some changes here or there. Every change needed permission… even for small things, like installing some sort of window blinds to keep the sun out in summer and the installation of those was not always allowed. No window blinds for the garden side of the chateau, because it would ruin the overall look. One could not simply go about to paint the walls either. Permission was needed and if granted one had to wait for the royal painters to show up… days, weeks, months. The King covered the costs for renovations in most cases and he also sponsored items such as mirrors and candelabras. The poor Messieurs in charge of the upkeep, were constantly bombarded with letters of courtiers demanding this or that renovation or item.

There was also a lot of dust. Versailles, during the time of Louis XIV, was constantly under construction. There was always a part of the chateau where construction work took place. Rooms were remodelled, rooms were dismantled to make space for something else, there was work on the facades, the stairwells, the corridors… and the dust got everywhere. The ladies swept through the dust in their heavy brocade dresses, it got into the fabrics, the wigs. Everywhere. Construction work, of course, created quite the noise as well. On top of the noise all the courtiers and servants made. 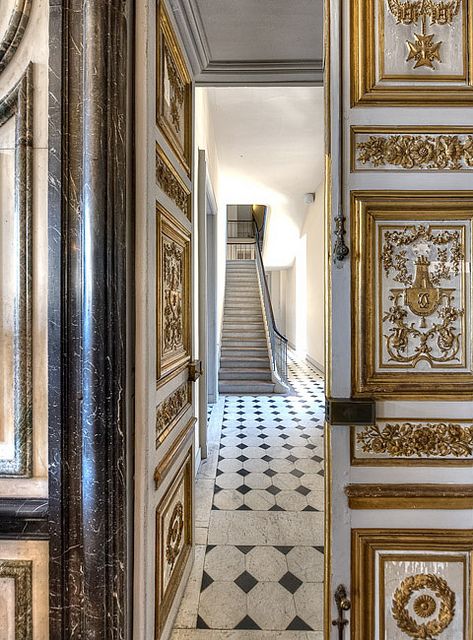 Yet another problem was the lighting of the rooms. Rooms with large windows were most sought after, although they did get freezing cold in winter… but at least those large windows allowed some light in. Ground-floor and attic-level rooms were generally very dark if not on the garden side of the chateau. Rooms facing inner-courts hardly saw direct sun light…

And then there was the vermin. We are not talking about unpleasant courtiers here, although there were a lot, we talk about actual mice and rats. Versailles had a serious rat problem in the 18th century, due to neglected renovations. The rats settled everywhere they could and had access to food. Hordes of rats lived underneath the floors of the kitchens, storage rooms and the inner courtyards.

As you can imagine, if a place is very crowded, diseases can spread quickly. Versailles was a bit like a bowl full of bacteria. People did not wash their hands, or themselves, too often. The general hygiene was not too great by our standards. Thus diseases could spread quickly and easily. It was hard to contain and if there was a case of smallpox or measles, whole wings were shut down and people hurried to leave the chateau.

The fact that the court did not travel as often anymore, help to spread diseases as well. For centuries, the French Kings switched their residences every few months. This was less the case under Louis XIII and by the time Versailles was named seat of government, the court usually stayed at the same place, namely Versailles. This interfered with cleaning. Back in the days, a residence was cleaned and renovated once the King had left it. He would go the next, stay there for a while, then this residence would be cleaned and renovated as the King moved on. Versailles was constantly occupied and thus the basic cleaning and renovations could not be done in peace. Cleaning and renovations were often completely neglected in some parts of the chateau, ,which led to bumpy wood floors, crumbling plaster, leaking roofs and heaps of dirt and dust.

So, we have small rooms, freezing cold in the winter and terribly hot in the summers, intolerable roommates, bad lighting, not functioning fireplaces, lacking cleanliness and renovations, bacteria pools, a general bad smell and vermin…. yes, Louis XIV and the inhabitants of Versailles would envy us very much.

The Silver Furniture of Versailles