1 May, his Majesty is displeased with the Duchesse de Montpensier, for her lack of interest to marry the King of Portugal.

2 May, a grand spectacle is being prepared for the following month. It will be a competition of horsemanship and held in front of the Louvre to celebrate the birth of Monseigneur.

3 May, his Majesty pays a visit to the horse market, then proceeds to the Louvre to inspect the place which is being prepared for the carrousel.

4 May, the King grants an audience to the ambassadors of Holland, the Messieurs Coenraad van Beuningen, Johann van Gent van Oosterweide and Justus de Huybert.

5 May, his Majesty travels to the Plaine de Colombes for a review of his gardes du corps, mousquetaires, gendarmes and chevau-légers.

6 May, his Majesty receives the ambassadors of Spain and Venice, as well as the general de l’Ordre de Sainte-Croix. Tonight, the King will dance again in the ballet Ercole amante.

9 May, Monsieur Colbert has today learned that the people of Boulonnais refuse to pay the 30.000 livres which they had been ordered to pay the previous year. It is said some of them have taken up arms and are in rebellion.

12 May, the King travels to Colombes to visit his aunt, the Queen of England, who currently resides there.

15 May, their Majesties leave Saint-Germain-en-Laye for Paris. Later today, his Majesty will receive the Duc de Bouillon, who has just married Marie-Anne Mancini, to have him swear his oath of fealty for his new position as governor of the Auvergne.

18 May, Ascension. Their Majesties attend mass at the chapel of the Louvre, after which they attend a sermon by the Abbé de Muzy.

19 May, their Majesties go to the église des Jacobins in the rue Saint-Honoré for the Benediction of the Blessed Sacrament.

21 May, her Royal Highness, Mademoiselle d’Orléans, is baptised today in the chapel of the Palais-Royal and given the beautiful name Marie-Louise. Their Majesties and the Queen of England are present. After their Majesties have enjoyed a promenade, the King goes to receive the ambassadors of Holland, before their departure.

23 May, his Majesty participates in several training races for the planned carrousel, which will be held to celebrate the birth of the Dauphin.

25 May, their Majesties attend the baptism of the daughter of the Marquis de Cavisson. The girl is named Louise. This evening, Monsieur invites to a grand ball at the Palais-Royal.

26 May, his Majesty grants an audience to Monsieur le Marquis de La Fuente, ambassador of Spain, after which his Majesty travels to the plaine de Colombes to oversee the training of his gardes du corps, mousquetaires, gendarmes and chevau-légers.

27 May, at the Louvre, his Majesty attends the evensong officiated by the Bishop de Bayonne.

28 May, Pentecost, wearing the grand collier de l’ordre, his Majesty visits the Feuillants for mass, after which his Majesty travels to the Tuileries to heal those suffering of maladies by his touch. In the afternoon, his Majesty attends the evensong at Saint-Germain-l’Auxerrois and the sermon of Monsieur Proyard.

30 May, his Majesty travels to Fontainebleau, where he will stay for two days. 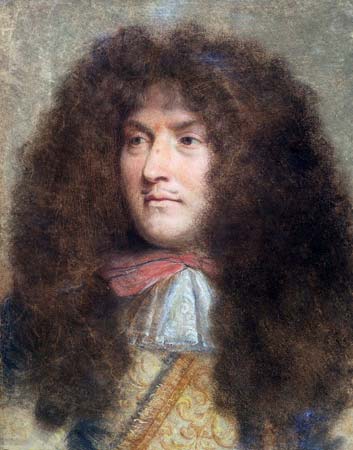