Theme License is not active! Please Activate it now to get started or if you don't have one - Buy it now.
Mademoiselle’s favourite history movies… – Party like 1660
Party like 1660

Since some of you probably have a couple of days off after Christmas, I thought I share some of my fave history movies with you. Not all of them are 17th century or even Louis XIV related, but definitely worth a watch. Some of them can be watched via Amazon Prime, if you have it, or rented via Amazon Video, so I include the links to it. Just click on the picture and there you are.

My personal favourite history and Louis XIV movie ever is Le Roi Danse. I have not encountered any other movie that manages to bring that Louis XIV-feeling on the screen like this one does. What is it about?

It follows the relationship of Monsieur Lully and Louis XIV from the end of the Fronde to the demise of Monsieur Lully. Lots of fabulous costumes, magnificent music, beautiful sets and Benoit Magimel doing a perfect job as Louis XIV. Unfortunately, it is quite difficult to find an English dubbed version of it, but even if you do not speak French it is well worth a watch and the story not difficult to follow.

Another very good one is the 2007 Molière and this one comes with English subtitles. It’s about Jean-Baptiste Poquelin aka Molière before he became famous and was a struggling actor with plenty of debts. To avoid going into prison, Molière goes into hiding, improves his acting skills and falls in love.

The story itself is mostly fictional, but in a very appealing way by featuring actual scenes and text from Molière’s plays, like Tartuffe, Le Misanthrope, The Imaginary Invalid, and Le Bourgeois Gentilhomme. Making it appear like his adventures in the movie later inspired him to write the plays.

My second favourite Louis XIV movie is Vatel. I do love that one nearly as much as Le Roi Danse. Francois Vatel, faithful and skilled entertainment-master for le Grand Condé, has to arrange for a party for his master. Special guest: the King and his whole court.

In the middle of arranging it all, he falls in love with the woman the King is ogling, while the whole court wonders if France will go to war with the Dutch. The best thing in this movie, in my opinion, is Monsieur played by Murray Lachlan Young. He is fabulous, a proper show-stealer and pretty close to the historical Monsieur character.

Not Louis XIV, but Louis XVI is Ridicule. It follows a noble gentleman from the province, who travels to Versailles in order to gain the support of the King for his plan to drain the swamps at home. (Not in the Trump way.)

Monsieur Province-Noble has to face all the difficulties someone not known at court is confronted with, from handing in documents stating that he is actually noble, to making important friends, to being the joke of the party to becoming the one who makes the jokes… to falling in love with a Mademoiselle that is promised to someone else.

Louis XVI again, or rather Marie-Antoinette. Les Adieux à la Reine takes you to the eve of the French Revolution and a chaotic Versailles. The story follows Marie-Antoinette’s devoted reader and her relationship to the Queen, while scared nobles flee the palace to save their heads.

What I really like about this one, is how it takes you behind the scenes of the golden splendour and shows the not so golden living quarters of those who were not princes or royal family. Small and quite simple rooms and gloomy corridors…

From Marie-Antoinette to another Queen of France, Marguerite de Valois. La Reine Margot tells the story of Margot’s wedding to Henri de Navarre, the following St. Bartholomew’s Day massacre and its consequences.

It is full with intrigue, quite violent and rather bloody at times… but so very good.

The Princess Of Montpensier plays roughly in the same time as La Reine Margot… and it has Gaspard Ulliel as Henri de Lorraine, Duc de Guise. If that is not enough reason to watch it already, then I do not know.

The story is based on La Princesse de Clèves by Madame de La Fayette, featuring a young heiress, Marie, being in love, and loved by, Henri, but having to marry someone else instead.

I do enjoy a good horror movie and I enjoyed this one a lot. The VVitch (spelled with two V instead of W) is more subtle horror and set in 1630 New England.

Very pious family lives in the middle of nowhere, minding their own business, but then their youngest child vanishes mysteriously… the family has to fight their own fears and superstition to get behind the strange events happening.

Dangerous Liaisons is an absolute classic and there are several versions of it. I like the one with John Malkovich best, because John Malkovich. Period.

Set in pre-Revolution France, two decadent nobles play a very dangerous game of love and intrigue that ends in disaster for most of the involved parties.

Orlando is rather brilliant too. Orlando, an English nobleman, defies the laws of nature after promising Elizabeth I on her deathbed to stay forever young. Not just does he stay forever young, but also changes sexes.

Which turns out to be a bit of a problem for Orlando, because women are not allowed to hold property and all that.

Angelique. You might have heard of the novels or read them, this movie series puts it all on the screen.

Angelique, a young province girl of noble nature, has to marry a man she does not love, but eventually falls in love with… just as the hubby is arrested and killed… or not? He might have actually escaped. Angelique investigates, her way leading her to the court of the Sun King, the gutters of Paris and far-away-lands. It is dramatic, cheesy and fabulous. Perfect for binge watching.

A bit of a Christmas special, I guess. I’m a fan of Monsieur Vincent Cassel and he recently starred in a French made Beauty and the Beast.

La Belle et la Bête, how the whole thing is called in French, is different to the Disney version you most likely know and adds a bit more magic too it. There is no singing, but stunning costumes and a sort of renaissance atmosphere.

If you have watched any of them, let me know how you like them. 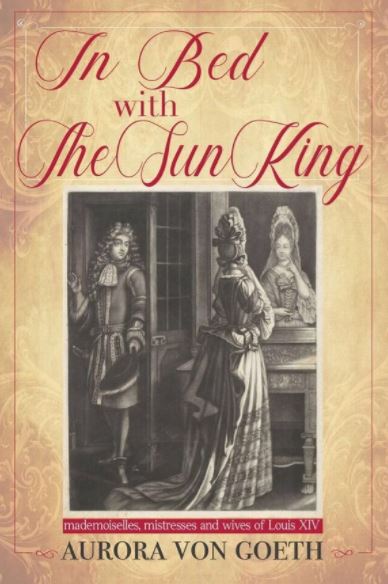 In bed with the Sun King, mademoiselles, mistresses and wives of Louis XIV