Here are two, not too complicated, recipes for some of Louis XIV’s favourite things to eat. Both are meant for six persons, and both have two of the Sun King’s favoured ingredients, asparagus and pears.

Clean and cut the asparagus in about 2 cm sections. Fry 25 g butter in a large skillet pan and add the onion, after having cut it into small pieces, half a chopped parsley, chopped chives, nutmeg and crumbled thyme. Add salt and pepper, then cook it on medium heat for 15 minutes, stir regularly. Beat the eggs with the cream and the rest of the herbs, add some salt and pepper, then add the cooked asparagus to the egg mixture.
Melt another 25 g butter in the same skillet and pour in the mixture. Let cook on very low heat until the omelette is soft but not liquid. Serve it hot or cold, accompanied by a green salad, seasoned with a vinaigrette based on lemon juice and orange.

Flour a work surface and divide the pastry dough in half.One for the bottom crust, the other for the top. Soak the raisins in lukewarm water. Carefully wash and brush the lemon before peeling it with a paring knife as thinly as possible. Chop into small pieces and boil twice.
Drain and add to a syrup you will have prepared in a small saucepan from 50 g of sugar and 10 cl of water. Gently boil for around 10 minutes until obtaining a still-fluid mixture containing the lemon peel. Meanwhile, peel the pears and cut them into small pieces. Put the pears, pine nuts, drained raisins, candied lemon peel, remaining sugar and cinnamon in a large bowl, mix well and leave to rest for 15 minutes.
Preheat the oven to 200°C. Place half the pastry dough in a pie dish and fill with the pear mixture. Cover with the other half of the dough, sealing the edges and brushing with the egg yolk diluted in tablespoon of water. Make a hole in the centre, keeping it open with small cardboard funnel.
Bake it for 1 hour and check from time to time. When the top is golden brown, you can loosely cover it with aluminium to keep it from burning. Serve warm or cool. 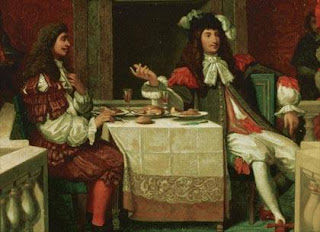 This third dish is quite lavish and would have been served this way for the Grand Couvert.

Split the chicken in half at the chest. Incise the joints lightly (thighs and wings), without detaching the pieces. Use your hands to flatten the chicken and line a pan with the sliced bacon. Chop the parsley finely, as well as the shallot and peeled garlic, add crumbled thyme and rosemary needles. Mix the herbs with olive oil and some salt and pepper, then spread it over the chicken and add the diced ham. Put the chicken in the pan on the sliced bacon and cover it with very un-17th-century aluminium foil to let it rest in your very un-17th-century fridge for some hours. Preheat your oven  to 175 ° C and bake the chicken for 1 hour, make sure to sprinkle it frequently with the cooking juice. Turn the chicken once, if you want you can sprinkle it with a bit of white wine then. Remove the foil after one hour and set your oven to grill, let the chicken get nice and brown. Ready to serve.

I also came across a recipe from 1651 for French Onion Soup, unfortunately it does not come with more description than this: Cut your onions into very thin slices, fry them with butter, and after they are fried put them into a pot with water or with pease broth. After they are well sod, put in it a crust of bread and let it boile a very little; you may put some capers in it. Dry your bread then stove it; take up, and serve with one drop of vinegar.

If you fancy to try more recipes from Louis XIV’s time, there is a lovely cooking book by Joyce Briand and Anne De Bergh called 100 Recipes from the Time of Louis XIV, which you can get in English here.